If you are looking for a way to wrangle your unruly Twitter feed, Twitter Lists are for you.

If you are relatively new to Twitter, you’ve likely started following more people than you can possibly keep up with. You’ll never reach the bottom of your Twitter feed — don’t worry, you aren’t supposed to, and no one expects you to. But how do you find people having conversations that you want to follow or engage in?

I suggest taking three basic steps to get yourself familiar with Lists and start understanding their potential:

You can browse a user’s Lists by navigating to their profile and clicking Lists on the left menu. Let’s pretend you are not me (not too hard, as I’m pretty sure you are not!) and you wanted to subscribe to one of my Lists. From my profile, you’ll see a left menu with “Lists” at the bottom. Click it!

Here you’ll see all of the Lists I’m subscribed to — first ones I’ve created, and then any others that I follow. You will see the List names, descriptions (if provided), and the avatar of the person who created each List. You will also be able to browse Lists that other people have created that I’m a member of, in case you want to check out and possibly subscribe to those Lists. 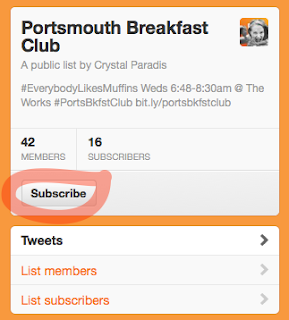 Once subscribed, you can find the List from your own profile’s lineup of Lists—it’ll have the avatar of the creator of the list next to it, and appear (publicly) underneath Lists that you have created yourself.

List Name: Titles are limited to 25 characters and must start with a letter, but can contain numbers and other special characters.
Description (optional): If desired, give a brief (fewer than 140 characters) description of the list. The description will give others an idea of what to find in the List, if it’s public, or give you more reference info if private. Note: Unlike a user’s profile description, URLs and hashtags aren’t linked(clickable) in Lists descriptions.
Privacy: By default, Public will be selected. If you want your list to be Private, select Private and the Save your list.
Ta-da! You now have a List!

To add a follower, go their profile, click the User drop-down menu, and select “Add or Remove From Lists…” which will bring up all of your Lists. You can add the user to as many Lists as you want—or create a New List from this dialogue as well! Note: You do not have to follow a user to add them to a List. You can follow only 5 people and have dozens of Lists following hundreds or thousands of people!

The differences are pretty self-explanatory, but here are some details and use-cases of each type.

No one but you can see your Private Lists, and when you add a user to a Private List, they do not get notified.
You might use Private Lists for:
Competitors: If you want to keep a special eye on what others in your field are talking about or how they are using Twitter, a List is a great way to do that. If you’d rather these people not KNOW you’re keeping an eye on them, or you don’t want them to have easy access to the list of competitors you have compiled, a Private List is the way to go. This is also helpful if you don’t want them to know about you yet (users are not notified when added to a Private List).
Guilty Pleasures: Maybe you have a favorite hobby or TV show that you don’t want everyone to know about, but you want to keep track of fellow enthusiasts. Here you could collect others who, say, live-tweet and discuss Scandal on Wednesday nights, or share macramé tips. I say you should embrace what you really love, but if, for various reasons, you prefer to keep a certain interest to yourself, Private Lists allow you to still keep your finger on the pulse of your guilty pleasure.

Favorite Tweeters: Favorites Lists are handy for following the people you really don’t want to miss content from. I have a Private List called “Favsies”—and it’s a few people (5-6) that I enjoy so much that I want to make sure I can easily catch up on their tweets. If I have two minutes to hop on Twitter, this is the list I’m going to check. The only reason I keep it private, I suppose (and this may be a silly consideration), is to prevent people from wondering why THEY aren’t on my Favsies List. It’s not about popularity, and the people I consider my favorites can change as my interests change, so it’s just a handy way to keep track of my favorite people.
Incomplete/New lists: The most common reason that I personally have a List set to Private is because I want to wait until the list is reasonably populated before I allow others to follow it. Sometimes I may start a list of a certain type, unsure if I actually know enough people in that field to justify their own list. And to avoid a lame list populated with the tweets of just one or two frequent users, I’ll keep it Private until it grows into a healthy feed.

Public Lists can be viewed by anyone who is signed into Twitter (if you have a Private/Protected account, only people you approve to follow you will be able to see your Public Lists).
You might use Public Lists for:
Group Reference: If you’re a business with many Twitter users, a Team List is a great way to showcase all of your employees or colleagues so that people can get to know your team without searching for each member. If you’re organizing or even attending an event, having a list set up of all who RSVP or compiling one later of all who attended is a great way for attendees to connect with each other. It’s also an additional opportunity to acknowledge sponsors.

Sharing expertise: Curating a List can be very helpful to others interested the topic, sector, interest, or geographic region that your List represents. Subscribing to your List saves others the trouble of curating their own, and exposes them to the experts (or, at least, the experts that YOU follow) in that field. It also goes a good way towards proving your OWN expertise in that field by showing that you took the time to find quality contacts in that field, and, presumably, that you keep abreast of the content shared therein.
Growing your following: A useful byproduct of adding someone to a public List is that they will get notified when they are added. This not only gets you on their radar similar to the act of following them, it also shows more thought and authenticity behind your follow—you aren’t just a bot, following willy-nilly in hopes of a followback. You know their interests, their area of expertise, or whatever it is about them that earned them a spot on your list.

News: This is a list of both local and national news sources. If I want to know what’s going on, I click onto this list for people I know will have the scoop. (I also have a separate list for strictly local news sources.)
Portsmouth: These are all people who live and/or work in Portsmouth. It’s a great snapshot of everything happening in my town at all times.
Red Sox: My first ever list, these are the insiders of my favorite sports team—if there’s a trade going down, or a big game on, I’ve got this List streaming.

U.S. Representatives / US Congress: Here are a few examples of Lists curated by reputable sources that I might want to refer to, but don’t want to go to the trouble of updating every election cycle.

This is just the tip of the Iceberg…

You’ll soon find that Twitter Lists can be useful for a wide array of uses — please let me know in the comments what YOU use Lists for!
See you on Twitter!
social mediatwitter
1 comment 0 FacebookTwitterPinterestEmail

Better Than Bookmarks: Using EverClip to Save Web Pages & Articles in Evernote

Does Your Site’s Navigation Menu Tell Your Story?...

Advice from Commander Emily Bassett of the USS...

How Your Slide Deck Can Make Event Marketing...

“Marketing” is Not a Dirty Word

How Sleeping With a Potato Helped My Morning...

A Beginner’s Guide to Podcasts