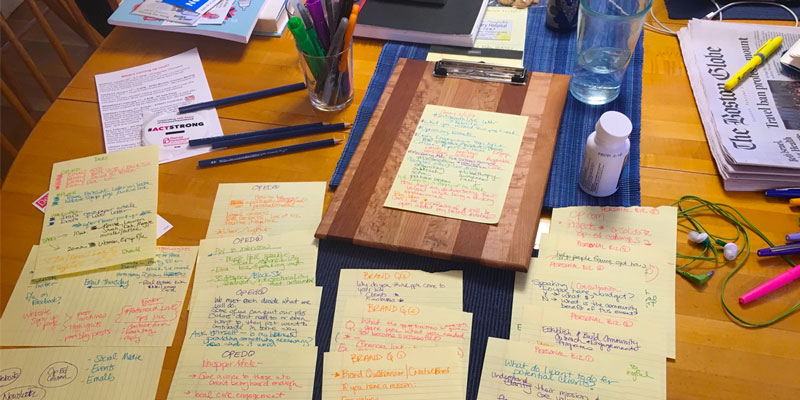 I’ve been able to supercharge my motivation and productivity lately — using a new method that doesn’t involve Evernote (shocking, I know!) or any digital tool at all. It’s a productivity method I gleaned from a talk that John Cleese gave on the subject of creativity some years ago. I’ve used it to decide what types of projects I want to be involved with, to better communicate my approach and to generate new ideas for ongoing projects.

Prioritizations passed down
From leaders, peers and self
Trying to put in order
Of most to least likely
To cause a crisis
If ignored

Who am I to ignore
This tree’s priority
Of being looked at
Of being appreciated
For its gnarled bark
Its high, reaching limbs
Stretching — stretching

Than anything sitting in my inbox

I lost my grandmother in February.

Ever wonder why there are three lengths of dashes, and if they each have a specific intended use (spoiler alert: they do!)? Or, mayhaps you hadn’t even noticed that there ARE varying lengths of dashes! Never worry — I’m here to help!

On the cusp of NaNoWriMo 2013, approximately 20 people gathered at the Portsmouth Public Library this evening to get advice and inspiration from published authors and past NaNoWriMo participants. This is my third year participating in NaNoWriMo, but I always find helpful tips at these gatherings—tips that pop into my head as I stare bleary-eyed at the words of my novel as they fill the screen at at a pace altogether too slow for my liking.

A few months ago, I learned about Coffitivity. It is a tool based around the notion that some people work better with the ambient noise of a bustling coffeeshop around them. I like Coffitivity a lot. I like even more that they’ve built in a volume level that can be adjusted in tandem with the volume of your own music, making it likely that you’ll at least give it a try, and that you’ll hopefully keep using it even if you are a music listener.

Thanks to Netted by the Webbys, I just discovered another new service: focus@will. This site offers channels of various genres of music for focusing and productivity—and the kicker is, they are all ambient, wordless, lyricless tunes, which is optimal for not losing focus.

I’ve created Rdio playlists for writing—some classical, some movie soundtracks (which are great for writing fiction, and which I lean heavily upon for NaNoWriMo in November), but this is one-click access to curated ambient music, which is way easier than culling your own wordless tunes.

So there you have it—two new productivity tools for writing, working, and getting things done! I love finding this cool tools, so please let me know what neat-o productivity hacks YOU have discovered!

It’s all About the Journey: A Tale from My Day Off

It would’ve been an impressive bit of foreshadowing, had I the omniscience to recognize it as such at the time, that I thought to myself as I left my house for the beach, “I might actually take an extra scenic block-circler once I near the beach, so that my phone might fully charge whilst in my vehicle, and in this way be fully prepared to spurt out tunage into mine eardrums whilst I gaze into the horizon over the shoreline at the beach…” Little did I know…

END_OF_DOCUMENT_TOKEN_TO_BE_REPLACED
It’s all About the Journey: A Tale from My Day Off was last modified: August 1st, 2013 by Crystal Paradis
August 1, 2013
0 Facebook Twitter Google + Pinterest
CopywritingMarketingProductivityWriting

Writing is an important part of any job, particularly if you use social media, where communication style and language are integral to maintaining a consistent voice. However, there are times when a writing project arises which is longer than 140 characters or the average Facebook post. And if you are tired of looking at Microsoft Word’s clunky interface, trying some new tools may help get your creative juices flowing.

Sand in My Bailey Bag, a poem.

Sand in my Bailey Bag

What The Words Taught Me About Writing | Steal Your Heroes’ Words

It’s hard to find a place to start writing when you’ve been out of practice. As alluded to in the oft-quoted and posterified snippet from Ira Glass, there’s a level of taste that any writer has that always exceeds his or her ability, at least at the start. It takes some time before words coming from your own mind and pen and fingertips starts to impress you, and feel exciting and good and are something that you are proud of.

I was reminded again today of the scene in The Words when the main character, played by Bradley Cooper, starts to type the words of the manuscript he’s found. He’s become so enamored with the words that exceed anything he’s ever written, that he just wants to feel those words go through his fingertips. By simply copying these words, he feels a rush that has been missing from his stultified writing life. Even if it’s not something he crafted, the simple act of typing great language gets a spark going again that he’s been missing.

Now, regardless of where the story goes in the film (I’m no spoiler!), this concept seems useful to me. There are many versions of the advice “just start writing/typing” that we writers all have heard from various authors and creatives, and I say if you don’t have any words of your own, why not steal them? Now, it’s rare that anything related to creativity in the last few years that resonates with me does NOT tie back into one way or another to Austin Kleon’s Steal Like an Artist book—and quite often, it’s not a quote from Kleon himself, but from someone else he’s quoted, thereby reinforcing his whole message, which is a combination of two opposite truths: that nothing is original, and also that everything YOU make is unique. True to form, a quote from his book does come to mind when considering the idea of stealing your heroes’ words, this one from Francis Ford Coppola:

So, I say, if you’re stuck in a rut and you want a shortcut to that feeling you get when the words that start pouring out are really good, grab a book you love by an author that inspires you, and start copying out some of your favorite passages. Once you get a taste again of what well-crafted language feels like coming out, you’ll do what it takes to get back in the habit of creating that language yourself.

Reading really good work also has this effect on me. I recently picked up a book of poetry, The Best Poems of the English Language, which sounds terribly overpromising, but I trusted the collection because it is curated by none other than Harold Bloom, who wrote Shakespeare: The Invention of the Human, a book I was obsessed with in high school (it’s quite possible Bloom occasionally engages in hyperbole, but he does follow through with ample support of his claims). Reading Geoffrey Chaucer’s and John Cleveland’s words had an effect on me similar to the sound of packing a new pack of cigarettes, back when I was a heavy smoker—it nearly made my mouth water. I’m no biologist, but I believe the addiction neurons in the brain, the dopaminergic centers (my neurologist former roommate would be so proud of me for remembering that), act the same whether your addiction is a substance or a well-turned phrase… give yourself a taste of that feeling, and you will alter your behavior to keep that feeling coming.

Having a daily habit of reading and writing is tough to keep, but I hereby grant you permission to “cheat” if you need to—copy down words of your heroes to get your juices flowing.

They won’t mind, I promise.*

(For more life lessons I’ve learned from films, check out “How The Girl With the Dragon Tattoo Changed the Way I Use My Computer“)
—

*Disclaimer: This advice is for personal use only, and is not intended as an implicit or direct endorsement of plagiarism or an attempt to publish work by or wrongfully claim authorship of another’s work.

Warning: Illegal string offset 'count' in /home/customer/www/crystalparadis.com/public_html/wp-content/plugins/instagram-slider-widget/includes/class-wis_instagram_slider.php on line 847
No images found!
Try some other hashtag or username