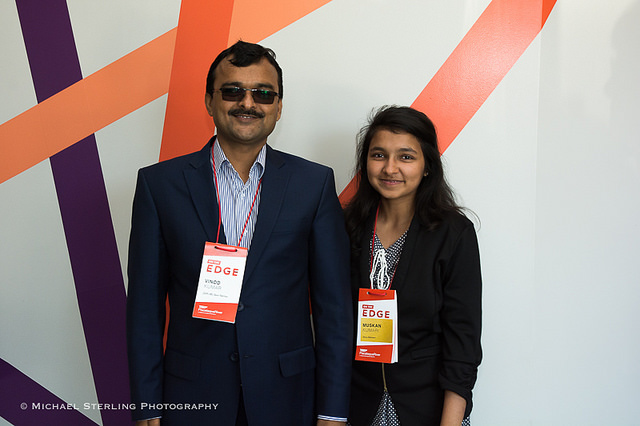 As a TEDx organizer and curator, I’m always on the lookout for truly standout speakers and ideas. Muskan Kumari got on TEDxPiscataquaRiver’s radar when she applied online to be a speaker — the exception that proved the rule that people who nominate themselves do not always make the best TEDx speakers. I’m so glad that she did nominate herself, because otherwise, we would never have found this compelling student from Pakistan, who had come to New Hampshire for a year. Below is an event recap I originally published on TEDxPiscataquaRiver.com. I hope you’ll read it, watch her talk, and be inspired to change the world — or to take a risk and nominate yourself for something bold. You never know what might come of it.

The future global leaders right in our own backyards: Muskan Kumari at TEDxPiscataquaRiver

It has come to be expected that your local TEDx event will feature a mix of local voices and nationally-acclaimed leaders from a variety of fields. But this year’s TEDxPiscataquaRiver was treated with an international guest in one 16-year-old Muskan Kumari, who presented her TEDx talk entitled “Looking for a Different Side.” Muskan had much to tell the Portsmouth, New Hampshire crowd, about her own misconceptions about the United States before she arrived, and the misconceptions that greeted her when she first arrived at a small New Hampshire high school.

Muskan’s father, Vinod Kumar, travelled from Pakistan to Portsmouth to see her talk and arrived at 3S Artspace Friday morning, May 6th, with Muskan’s uncle from Connecticut. They joined over 200 people who sat with rapt attention as Muskan took the stage shortly before lunch during the full-day TEDx conference. “Little I’ve been in the United States and little I know about the real story of the common American citizens,” she started, explaining her journey to the US.

Muskan arrived in Goffstown, New Hampshire in August 2015 after being one of only a handful of students selected from Pakistan to participate in the Kennedy-Lugar Youth Exchange and Study (YES) program. Though she is only 16 years old, she is set to graduate US high school in two weeks, before returning to Pakistan in June to finish high school in her hometown and then returning the US for college.

“I chose to participate in this exchange program to diminish single stories and labels regarding my religion, my country and my own self,” Muskan said. “I always found America as one of those powerful nations who have nothing else but hatred towards predominantly Muslim nations. But, after coming to the United States, this false image has been diminished. No wonder, why a dialogue from To Kill a Mockingbird feels so true: ‘Atticus, he was real nice.’ ‘Most people are, Scout, when you finally see them.’”

After talk, Muskan was approached by attendee after attendee, all telling her how her talk affected them, and how happy they were to have heard her message. Muskan said that she found TED Talks when she was 11 years old, and ever since then it had been her dream to someday give one, herself.

Amidst well-known authors, scientists and CEOs, this brave young woman from Pakistan was a highlight of the day for many. Her message to all resounded.