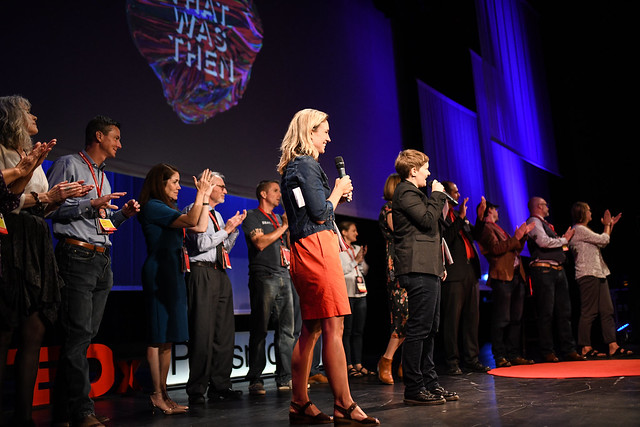 As I pass the baton of TEDxPortsmouth to two of the most capable people in our Portsmouth community, co-organizers Anna Goldsmith and Amy Sterndale, I wanted to take the opportunity to reflect on how TEDxPortsmouth, originally TEDxPiscataquaRiver, has played a significant role in my relationship with my community.

I was asked way back in 2012 to join a team that was exploring the possibility of bringing a TEDx event to Portsmouth. I knew about TED Talks, but this was my first introduction to TEDx — locally-organized events that brought big ideas to their local stages, in the spirit of TED’s Idea’s Worth Spreading. I said yes right away and joined co-organizers Evan Karatzas of Proximity Labs and Chris Greiner of 3S Artspace to assemble an advisory board that included 12 local leaders across various industries. This board would set our vision of what a TEDx event would look like that reflected our unique city of Portsmouth. It was the big idea of Sherry-Lea Bloodworth Botop to bring a TEDx event to Portsmouth, but it quickly became a truly community-led endeavor. 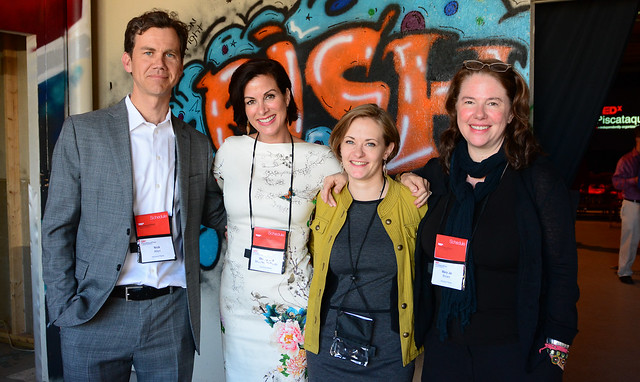 With Nick Allen (who would be my co-organizer at our 2014 event), Sherry-Lea Bloodworth Botop (whose idea it was to do a TEDx in Portsmouth) and Mary Jo Brown (who was on the inaugural advisory board) at our first-ever TEDx event, at what would soon be 3S Artspace.

On this team were folks like Lisa Butler, who led the speaker coordination efforts for that first event; Kate Martin, who coordinated day-of event logistics; co-organizer Chris Greiner, who was working on bringing his 3S Artspace idea into physical reality at Vaughan Street; and co-organizer and inaugural TEDxPiscataquaRiver licensee, Evan Karatzas, who extended that fateful invitation to me at the start.

I joined this incredible team, working alongside community members who were all putting in countless hours to create a TED-like day-long conference in our Port City. Eventually, we selected 319 Vaughan Street building, then just an empty warehouse with the future promise of becoming 3S Artspace, as the site for Portsmouth’s first TEDx event. What better way to help the community imagine what a space like 3S could bring to the community, then to transform it for a day into a dramatic and (hopefully) life-changing event?

And life-changing it was — for me, at least, and for many others as it turned out. My personal memories of that weekend were frantic long hours and late nights at 319 Vaughan (thanks to Mary Jo Brown for the Savario’s calzone delivery!), in a revolving door of mini-panics about name tags, license requirements, and coordinating with folks across the community including the press, folks on our guest list, lottery ticket winners and others. I couldn’t *wait* to find Evan and Chris after the event, thank them so much for the experience, and let them know that I wouldn’t be able to do it again next year. It was too much — no way was I doing this all again!

The the morning of our event came. Starting in the wee hours that morning, I was frantic about name tags (still) and guest lists and parking and a hundred other details. But then it happened. Show time came, the lights went down, and a quiet, anticipatory hush came over the crowd. It was in that moment that I realized that this room full of people had absolutely no expectations beyond excitement for what was about to happen. As we cold-opened on a wonderfully weird tech-device band, I saw people’s eyes light up. As our first speaker and then our second and third took the stage, I stood in the back, watching silhouetted heads nod along in resonance with the ideas coming from the stage, and my eyes welled up. That was the moment — I was hooked. 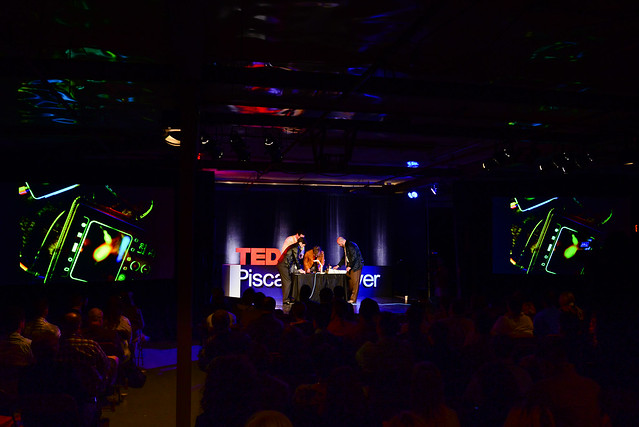 That 2013 event was the first of six annual TEDx events that I either co-organized or led over the next 6 years in Portsmouth, the city where I was born. There were many moments that stood out across those years, but that moment standing in the back of the darkened warehouse that we’d somehow managed to transform into a world-class theater/conference experience — that’s the one I remember most.

And that moment is the one I wait for every year, for all of my co-organizers and teammates to have. We dream big, putting months of volunteer work and love and passion and ideas into these events. But it’s not until it happens and you get to watch something you’ve been obsessing over for the entire year be experienced by your community for the first time — that’s when you’re really “hooked” on being a part of TEDx. 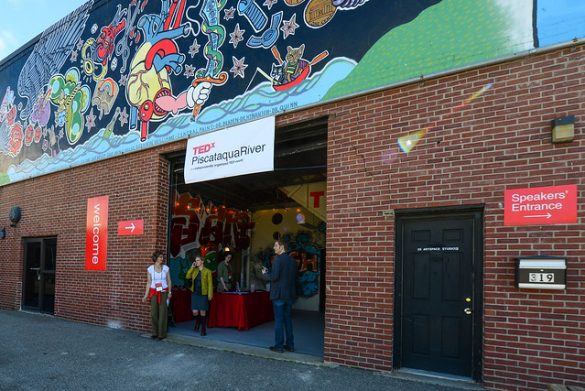 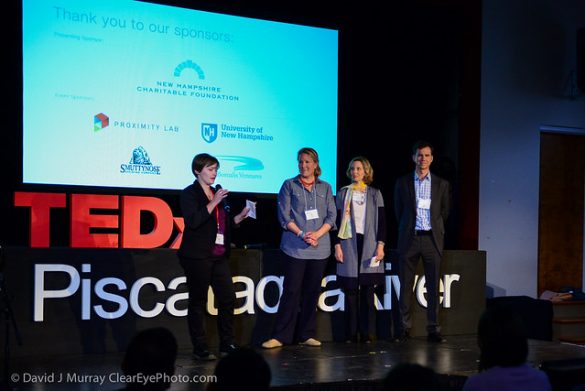 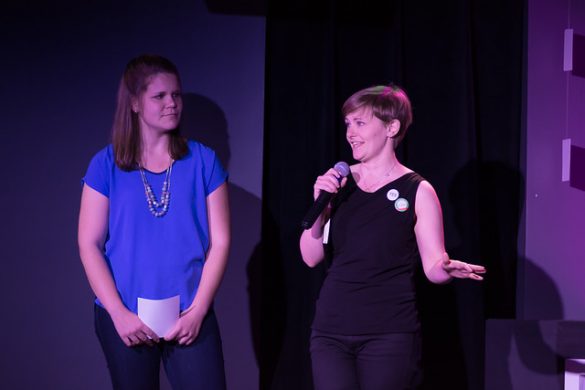 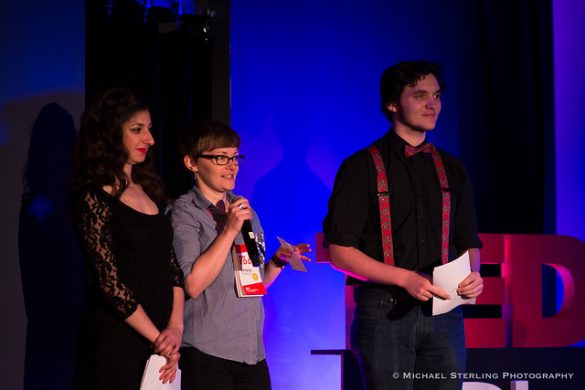 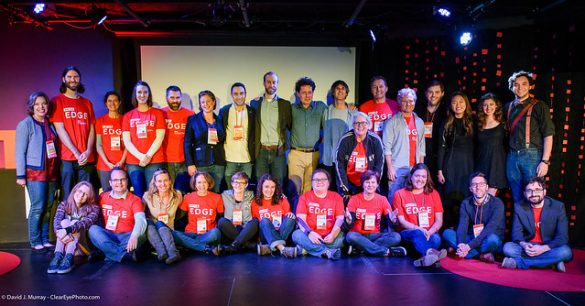 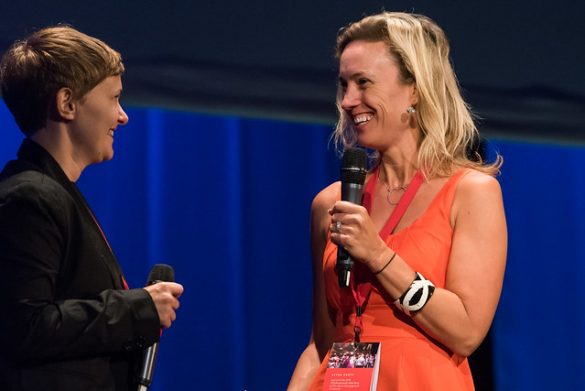 Over the next five years I was happy to work with some incredible co-organizers: Kate Martin, Nick Allen, Halie Olszowy, Devan Meserve and Anna Goldsmith; and with many outstanding volunteer team leaders and members, some of whom got new jobs through their TEDx volunteer roles, or are now recognized as a world-class singer when they pick up their kids at Little Harbor.

After seven years of planning six life-changing events, I am thrilled (and sure, a little nostalgically sad) to be passing the license on to Anna Goldsmith, my co-organizer last year for our biggest event ever — the 2018 TEDx event where we moved to The Music Hall, changed our name to the much easier to spell “TEDxPortsmouth” and got to welcome more than triple the amount of attendees to experience TEDx in their community. Taking my place as Anna’s co-organizer for Portsmouth’s 7th Annual TEDx event will be Amy Sterndale, an invaluable member of our team for a few years now, and the force most responsible for the caliber of last year’s most acclaimed speaker lineup yet. Anyone who knows or has heard about Anna or Amy knows that this event is in the most capable of hands, and I am so proud to see this event continue on as I step back from TEDxPortsmouth and onwards spreading big ideas through my new business, Feminist Oasis.

With co-organizer Anna Goldsmith at the end of TEDxPortsmouth 2018, on The Music Hall stage.

I launched Feminist Oasis last year (with an event that was also on Vaughan Street, actually!) and have been so excited to see it grow over its first year. We’ve had hundreds of people attend our events, dozens join as members and have partnered with scores of other businesses, nonprofits and individuals to co-create our events. Please check us out at feministoasis.com learn more about what we’re doing (building feminist community and exploring feminist values in action), who we’re partnering with next (UNH Women’s Studies Program, NH Theatre Project, 3S Artspace, Teatotaller, Sue’s Space), how to join as a member (and get Feminist Action Plans, event discounts and member social invites), and all the other fun ideas we have to integrate solidarity, resilience, sustainability and systemic justice into our lives and work.

I’m committed to giving my all to grow Feminist Oasis into a sustainable social enterprise. I’m so glad to say that that feeling of watching my community experience something that I’ve worked on for months — that feeling that TEDxPiscataquaRiver got me hooked on — is continuing on: for me with Feminist Oasis and, gratefully, for Anna and Amy and their incredible team at TEDxPortsmouth. 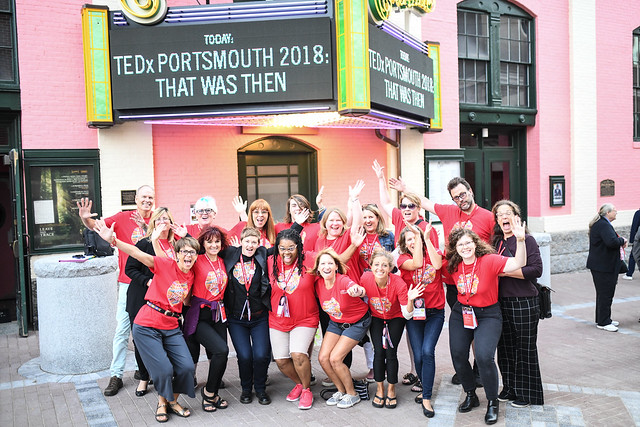 Thank you to all the people who have supported TEDxPiscataquaRiver and its growth into TEDxPortsmouth. The team members, speakers, sponsors and volunteers who have made these first six events possible is now well into the hundreds, and happily many have become dear friends of mine and with each other, all through this magical event based around ideas. I can’t wait to see where Anna and Amy take it — and I’m thrilled to be one of those silhouetted heads on September 13, 2019, as I show up with no expectations other than excitement for what is about to happen.

Lifting Each Other Up — Support networks are crucial to our existence 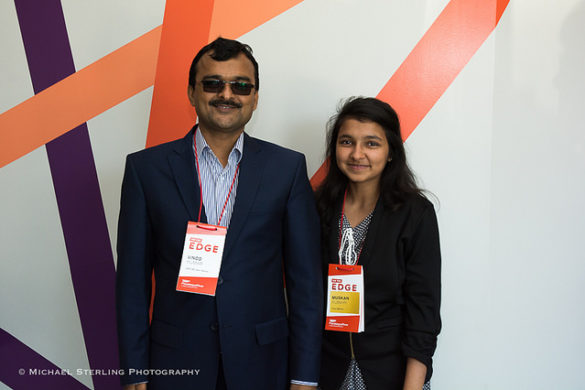 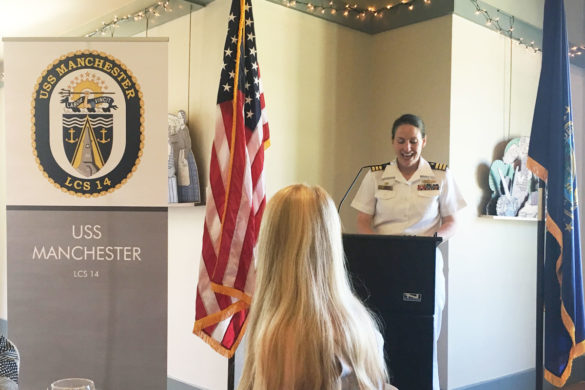