So, I know that I already did the word cloud thing, but it’s just so damned cool that I’m doing it again. Good ideas are recyclable. So are coffee cups. Drink responsibly, friends.

Obviously, when I get to the editing stage, I’m going to be hypervigilant about the words “just,” “around” and “one.”
I also decided today that Bat Man could come completely out of the book and not make too much of a difference. I mean, it was the exciting catalyst I needed to start writing fun stuff, but … I just don’t think the Bat Man elements are useful to the good parts of the novel so far. So I’ll probably delete that element in revision phase. But hey, for now, I’m 25,755 words in, and I should be over 30,000, so I’m doing another marathon weekend of writing.
Thankfully, everyone I know trusts me with their house keys, so I’m house/dog sitting again this weekend. Again, it’s a bigger house than mine, and of course I’m all alone in it, so it’s the absolute PERFECT place to get a shit ton of writing done over the weekend. I do have a few small friend engagements this evening, which will be a change from my usual hermit weekends. It’ll be interesting to see if I still know how to exist in a bar on a weekend night. Haven’t done that in months!
OOoooooh! And I got this chalkboard mug at Starbucks! 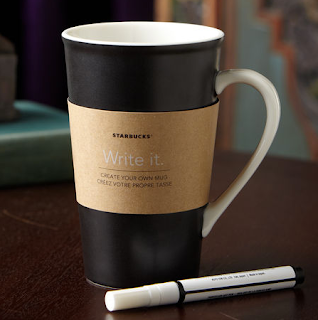 Totally inspired by Austin Kleon, I’m going to rip off his idea of writing something new on it every day. I’ll never claim that it was my idea, but I do think it’s a great spark for creativity, and as Mr. Kleon himself encourages artists to steal useful ideas, I think he’ll be okay with it.  Hmm… day one of Coffee Mug Art…
Okay, after further investigation, it has become clear to me that I do not pay enough attention when excited about something. Apparently this mug is designed for you to write on it, let it dry, then BAKE it to make it permanent. Not exactly what I thought. But, that’s an easy fix, I’ll simply stop by Michael’s this evening on my way out to dinner and purchase a white chalk marker. The mug seems shiny enough to be easily erasable. And regardless, I do love the mug on its own merits anyway– it’s pretty big, which is awesome because I like to fill mine with lots of tea. Or coffee. Or whiskey. You know, whatever. So I guess I’ll start writing on it TOMORROW. Or tonight. You know, whatever.
Peace out, yo!
—Crystal
NaNoWriMoWriting
0 comment 0 FacebookTwitterPinterestEmail

Lifting Each Other Up — Support networks are crucial...

‘Tis still the Season in Portsmouth